So that hike I was going to do, I did! I then got too busy and lazy to write about it for a few weeks. We went from Mountain Home Inn up to the peak of Mt. Tam, around the top, and then back down again. One of my friends brought a coffee for the trip up, because of reasons:

It started out foggy:

Our first leg was up Hogs Back, which exhausted all of us with its vigorous incline, but at least visibility slowly improved:

Here’s the route we took:

p.s. Did you know Google does trails? Neat!

On Fern Creek trail we found a secret grotto water tank covered in ferns, above a creek. Who would have thought the trail might have a sensible name? This was a really gorgeous little spot, about halfway between Old Railroad Grade and Old Railroad Grade: 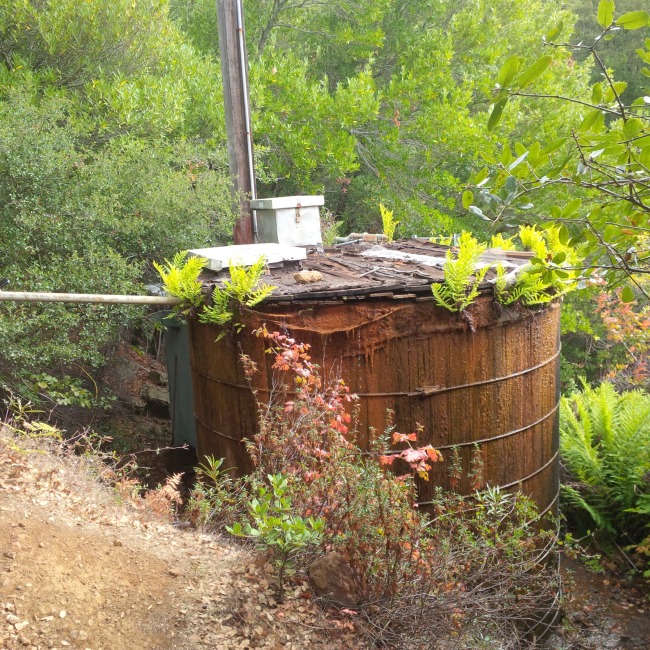 Not too long after that, we got to the top, had lunch, had a chat with the volunteer fire lookout who was up there. She had heard our entire conversation up to that point. She told us that eavesdropping is one of the best parts of the job. 😀

Then we went and played on the Gravity Car they have at the little museum up there, including crawling all over it working out how the brakes worked. Take engineers up a mountain, and they’ll find the only piece of machinery around and analyse it. 😀

Finally, here’s a picture of some poop full of berries. We saw quite a bit of this:

Total distance hiked was about five miles, with an ascent of about 1600 feet. I’m very satisfied that even at my weight, I was pretty much able to keep up with my two fittest friends, both of whom were also thoroughly exhausted by the climb.

Next post will be part of the exhaust gasket replacement, which didn’t go well.